This show presents precious items from the Lübeck collection, including music manuscripts, letters, printed music, and photographs. Central to the exhibition is a reconstruction of Brahms’ Vienna music room as an example of a bourgeois interior at the end of the nineteenth century. The pictorial program with Bismarck wearing a laurel wreath is as informative as the portraits of the musicians honored. Brahms literally had a bust of Beethoven breathing down his neck when he sat at the piano.

The exhibition also gives insights into the bourgeois musical culture without which Brahms’ compositional oeuvre would have been scarcely imaginable. As a composer of symphonies and large-format choral works as well as intimate songs and chamber music, he met the demands of an audience that treasured representative gestures at public musical festivals and concerts as much as the retreat to the private world of the salon. By producing numerous arrangements of his own works and the works of others for piano, the house instrument par excellence, Brahms responded to the bourgeois need for education of his age.

The show also explores the fissures in this bourgeois lifeworld: the Hamburg composer remained unmarried his whole life long, something hardly typical of a bourgeois biography. Instead, Brahms maintained a large circle of friends that provided him with an in part familial sense of security.

The letter represented an important medium of communication in the 19th century. As a letter writer, the composer also participated in the epistolary culture shaped primarily by the 19th century bourgeoisie.

Numerous photographs, drawings, and portrait busts captured the likeness of the prominent Vienna musician – usually with a big bushy beard, a cigar, and a bow tie. In the age of the cult of the genius, such everyday objects of the artist were stylized to highly symbolic mementos, including a lock of Brahms’ hair taken on his death day, his smoking utensils, or his personal wallet.

The exhibition explores the subjects in various sections, exploring them using music and text at four listening stations. 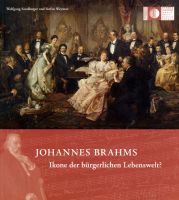