Accompanying the performance as part of the Schleswig-Holstein Musik Festival in 2012, Brahms-Institut at Musikhochschule Lübeck presents an exhibition on Ein deutsches Requiem and hosts a conference at Villa Brahms. The show presents outstanding examples from the collection on this »wonderful musical requiem« (Eduard Hanslick), including several items that are shown here for the very first time.

Precious loans from Vienna (Archiv der Gesellschaft der Musikfreunde in Wien; Wien Museum and private collections) complement the show. The exhibition directs attention in particular at the first performances of the work in Vienna, Bremen, Leipzig, and London. The exhibits include a partial manuscript of the requiem and printed scores, programs, letters, and photographs. A special focus is also placed on sources relating to the texts (text manuscript, a Bible, and religious books from the Brahms estate).

The contributions of the conference held in cooperation with the SHMF discussed questions about the texts selected, the concept of a Protestant music of mourning and consolation, and questions of the different versions of the work (the partial performance in Vienna, premiere at Bremen Cathedral, and the so-called ›London Version‹).

The timelessness of Ein deutsches Requiem still challenges artists today to productively engage with this work. One example is the renowned Karlsruhe-composer Wolfgang Rihm, who understands his four orchestral pieces Das Lesen der Schrift (2001/2002) as commentaries on Ein deutsches Requiem or the Speyer painter and graphic designer Regina Reim, whose extensive cycle Keine bleibende Statt (2000) is shown in the framework of the exhibition. Here, the artist translates the work into a visual language of the twenty-first century, transferring the notion of the ›Gesamtkunstwerk‹ from the romantic period: 50 square works in a format of 30 cm by 30 cm culminate in a 200 by 200 cm large painting on the front that tells of the beginning and end of life, of the infinity of the divine. 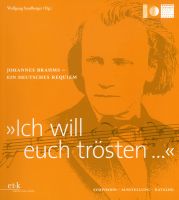