With important exhibits, including letters, prints, programs, busts, and photographs, the show traces Tchaikovsky’s stays in German cities. The exhibition’s focus is placed on a New Year’s encounter from 1888 with Brahms and Grieg in Leipzig, Tchaikovsky’s several-day stay in Lübeck and German premieres of the Fifth Symphony in Hamburg with the composer himself at the podium. In addition, the two violin concertos written by Brahms and Tschaikovsky at the same time are compared. Feared Vienna music critic Eduard Hanslick, a supporter of Brahms, wrote of the Russian composer that »there is also music that you can hear stinking«.

Two composers who left important marks on both Brahms and Tchaikovsky offer interesting points of comparison: Robert Schumann and Wolfgang Amadeus Mozart. Brahms engaged with Mozart’s music as a performer, collector, and editor. Tchaikovsky referred quite openly to Mozart in several compositions. To his patron Nadeshda von Meck he confessed: »The fact that I dedicated my life to music is something I thank Mozart for«.

The show emerged as part of the composer focus of SHMF 2015 and the Tchaikovsky conference »Grenzenlos? Peter Tschaikowsky in Deutschland«. 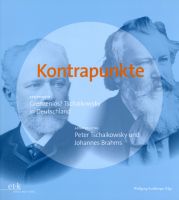