The »Treasure Chest« of the Brahms-Institut

The basis for the work of the Brahms-Institut is a collection with a profile that goes far beyond the composer it was named after. Beside Johannes Brahms, the collection also focuses on Robert and Clara Schumann, Theodor Kirchner, Joseph Joachim, and Julius Stockhausen, along with less well-known performers and composer who were also friends with Brahms, such as Theodor Avé-Lallemant, Richard Barth, Carl Georg Peter Grädener, Hermann Grädener, Richard Heuberger, Julius Spengel, and Emanuel Wirth.

The collection thus documents an important part of German-Austrian music history during the second half of the nineteenth century, focusing in particular on northern Germany with Hamburg as its center. Against the backdrop of musical discussions in the nineteenth century, the Schumann-Brahms circle is extensively represented in our collection, a circle that in their writing took a vigorous stance against the Wagnerians and the »New German School« around Franz Liszt.

The holdings include first and foremost musical works: precious manuscripts, engraving templates, first and early editions. In addition, the collection includes extensive correspondence written by the named artists and letters from friends and contemporaries. The iconographical holdings of pictures, paintings, and drawings, with a large number of Brahms’ own personal photographs, is another emphasis of the collection. The collection also includes a unique set of programs from important world premieres, first performances, and later performances – important documents of reception history. Here, too, many came from the estate of Johannes Brahms himself.

Since the founding of the Brahms-Institut, its holdings have been expanded through many important purchases and bequests. Important recent acquisitions include the manuscript of the Second Piano Quartet op. 26, from the estate of pianist Rudolf Serkin, the engraving template for the Clarinet Quintet op. 115, the previously unknown corrections of the voice parts for String Quintet op. 88, a piano reduction of Ein deutsches Requiem with a manuscript of the fifth movement (»Ihr habt nun Traurigkeit«), the letters from Brahms to his publisher C. F. Peters, and a large set of almost 900 letters from Joseph Joachim to his brother Heinrich reflecting European music and contemporary history from 1846 to 1907.

In the year 2000, it was possible to acquire important musical manuscripts and letters from the family archive Avé-Lallemant, including the only extant autograph copy of the Brahms motet op. 29, No. 1: Es ist das Heil uns kommen her, and the working manuscript of Bilder aus Osten op. 66 by Robert Schumann, which offers fascinating insights into this composers way of working.

Recent acquisitions include the autograph of the Brahms song »Liebesgluth«, op. 47, No. 2, which had been considered lost, the autograph musical album sheet Adagio espressivo with 24 measures of the second movement of the Violin Sonata in G Major op. 78 and a letter from Brahms to Clara Schumann. The four choral movements (No. 1: »Rosmarin«, No. 2: »Von alten Liebesliedern«, No. 3: »Waldesnacht«, No. 4: »Dein Herzlein mild«) from Sieben Lieder für gemischten Chor op. 62 in Brahms’ own hand, Brahms’ manuscripts of the songs op. 48, No. 2: »Der Überläufer« and op. 59, No. 5: »Agnes«, his own album sheet with the first three measures of the second movement »Intermezzo« from Piano Quartet in G Minor op. 25, Max Klinger’s Amor und Psyche. Rad. OPUS 5, graphic illustrations of the Tale of Apuleius, dedicated to Johannes Brahms, and Max Kalbeck’s own notes on the life and work of Johannes Brahms (around 500 pages).

The Estate of Renate Wirth contains wide-ranging source material on both her grandfathers, who were musicians and members of Brahms’ circle of friends: the singer Julius Stockhausen and Emanuel Wirth, violist of the renowned Joachim-Quartett.

With the Brahms-Briefwechsel-Verzeichnis (BBV, Brahms Correspondence Index) the genre of the letter became a focus of the collection. Numerous letters from private collections were donated to the institute.

The fact that the Brahms-Institut has been offered significant source material attests to the institution’s international reputation. 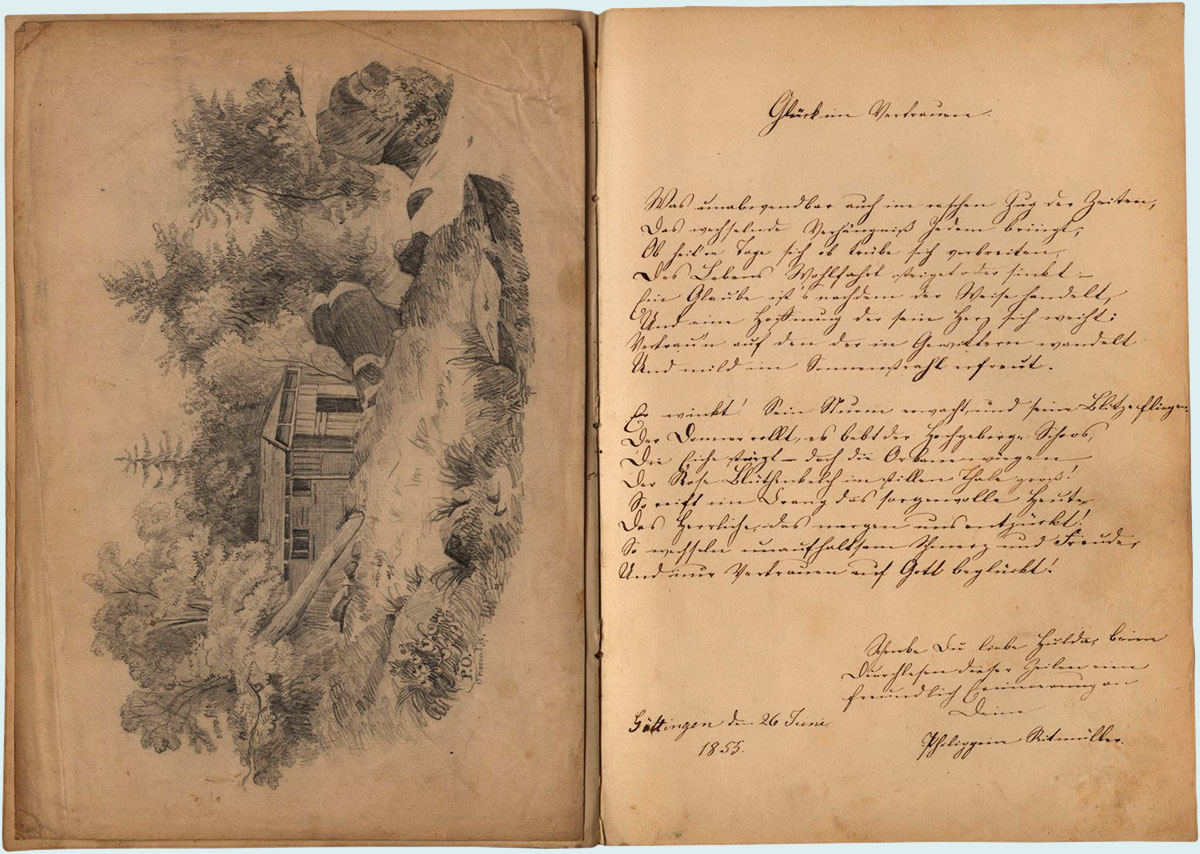